Swelling of the legs: edema of the ankle, knee, foot.

Sprain of the foot

Paresthesia / burning / of the foot

Swelling of the legs: edema of the ankle, knee, foot. 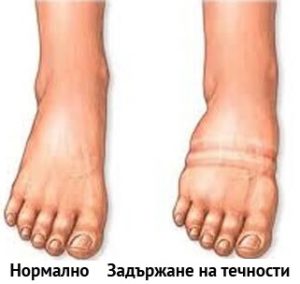 The turgidity and swelling of the lower limbs is often a signal for a morbid change. The edema increases the circumference, creates discomfort and makes walking more difficult.

The cause of swelling is not always visible. The edema is a symptom of a number of pathologies. Some of them are systematic like heart pathologies, and the others develop locally on the limb itself.

However, your body gives away sufficient signs, so that we can recognise the problem. The least we can see is if the edema is unilateral or bilateral, with a different degree of expression – including only the fingers, the entire sole, or it creeps up along the hip.

Based on these signs + the additional symptoms, doctors put the diagnose.

General data of swelling of the legs

The swelling is a disorder in the evacuation of liquids from the body tissues. The mechanism is as follows: liquids penetrate the intercellular space with ease and aggregate there. Under normal circumstances the reverse flow is also ensured.

The swelling of the lower limbs can sometimes reach unbearable dimensions.

The flow of liquids can be hampered or reduced when:

♠ The lymph draining is disturbed – accumulation of lymph (liquid with high protein content) in the subcutaneous tissue. The stagnant lymph forms a dense, painful edema. Its distinctive feature is the impossibility to hold the fold at the base of the IInd toe;

♠ Disturbed flow of blood from the veins and arteries – penetration of liquid from the capillary vessels into the tissues. Such type of stagnation forms a fragile enema, accompanied with pain sensations.

How can we differentiate stagnant blood from stagnant lymph? The lymph edema is painless and constant, whereas the disturbed blood flow causes pain and is significantly reduced if you lie horizontally for a while.

The swelling of the legs can sometimes be seen in perfectly healthy people. It has to do with excessive consumption of water and salts. The usual time for such an occurrence is during the heats of summer. During periods of high temperatures people drink lots of liquids. They enter the blood, but are not always evacuated from the body with sweat and urine.

When, together with them, people intake with food significant amounts of salt, this promotes the retention of liquids in the body. At a certain point, the heart no longer manages to cope with the increased amounts of blood, and it begins to stagnate (firstly, in the most remote place from the heart – the legs).

Stagnation of the blood

Stagnation of the blood in the lower extremities is sometimes assisted by additional factors. Among them we distinguish:

♠ Weight above the norm – obese people suffer more often from swelling of the legs in summer, because for the heart it is harder to pump blood through the increased amount of fatty tissues;

♠ Pressure from a vertical position – some people’s work has to do with prolonged periods of assuming positions, which put a load on the heart. In a vertical position, the blood flow reduces its intensity, and sometimes, this causes stagnation of the blood;

♠ Inactive life style, in combination with some of the above listed factors.

In the above cases, the edemas on the legs are not evidence of any disease, however, they signal that the life style creates conditions for the occurrence of one in the future.

When the edema is within the norm

The swelling of the leg is normal, and expected, when it is the result of wearing of tight shoes. The pressing of the tissues makes the circulation of liquids in them harder. A similar effect has the wearing of high heels. The fancy, fashionable, but keeping the sole in an unnatural position, shoes cause the stagnation of the lymph and the blood.

Spending several hours on high heels, requires after that the respective care to relax and rest.

The swelling is the natural consequence of a momentary abuse of alcohol and the intake of narcotics.

Hormonal fluctuations – the most common non-pathological cause in the fairer sex. It occurs in two cases:

A reduction in the level of progestins before menstruation;

Climacterium and post-menopause – an edema of the legs, hands and the face due to the change in the hormonal level. Usually it combines with acquiring several extra kilos and depressive conditions.

What to do with swollen legs?

First, we need to reduce the amount of liquids and salt that we consume. If the edema disperses and the legs return to their previous appearance, then this was the cause and we need to adjust more precisely the intake of salty food. Still, a consultation with an expert would be useful.

Second, we need to pay attention about what kinds of medicines we take. Some medicines provoke a swelling of the legs, and they also affect the operation of the heart and blood circulation. A risk in this respect pose the glucocorticoids, prescribed for a number of autoimmune and allergic pathologies, for severe inflammatory reactions, changes of the adrenal glands, etc. A doctor needs to either replace the medicine, or prescribe a different one, which must compensate for the side effect of the main therapy.

The swelling of the legs is also provoked by some medications for increased blood pressure. The medication induced edema occurs either during the day, or in the evening, then it settles down, and occurs again.

Third, are you using birth controls? The retention of liquids in the body, and as a consequence – the swelling of the legs can also be caused by sexual hormones. Estrogens are present in the composition of contraceptives, and men are being prescribed male hormones in case of a reproductive function disorders, obesity, etc.

One more thing that is also always useful – assisting the draining using the forces of gravity.

In this respect, we leave aside the external, non-morbid causes of swollen legs. However, if at this point he problem has not yet been solved, we have to continue searching in order to find the cause at an internal level.

Pathological edemas are caused by acute and chronic diseases, for which it is mandatory to consult and expert physician.

Measures in case of physiological edemas:

The orthopedic shoes by Dr.Orthopedic are comfortable, ergonomic, and they provide a massage to the heel and ensure the correct blood circulation of the lower limbs.