Anatomy of the foot

In the course of an average human life, each foot contacts the ground more than 10 million times. And out of a total of 206 bones in the structure of the human skeleton, 52 are located in the feet alone. And despite their extremely important role, approximately 20% of the world population suffers from flat feet /pes planus/ - a deformation, which affects both children, and adults, and to some extent, it also makes movement more difficult. The long and straight human legs, which contribute almost half of the total body height, contain the largest bones and the strongest muscles.
From anatomic point of view, the structure of the lower extremities is significantly different from the structure of the upper ones, since they are the ones that have to carry the entire body weight. Unlike the palm of the hand, the foot carries to the largest extent the body weight, and its structure completely matches this role. In order to distribute evenly this weight, the foot bones form an arch, which is supported both by the shape of the bones that provides the good contact between them, and by the muscles and the ligaments in the foot. This is a structure, which provides elasticity, and it also absorbs the shock during abrupt changes in the load, for example, during every-day movements, like walking, running and jumping. Good knowledge of anatomy and kinetics of the ankle-foot complex is crucially important for the precise diagnosing of patho-kinetic and pathologic changes in the feet.

The anatomic and kinesiologic structure of the feet and the ankle is quite complex. Knowledge about the structure and the function of the individual segments are very important, so that the arising patho-kinetic changes [1, 2, 3] can successfully be diagnosed and overcome.
The ankle-foot complex is an anatomic structure, which is typical of many vertebrate animals. This is the terminal section of the lower extremity, which supports the body weight and provides the movement of the body in the environment [1, 2, 3].
The human ankle-foot complex is a complex mechanical structure, containing 28 bones, 33 joints (20 of which, actively articulated), and more than a hundred muscles and tendons. [1, 2, 3]

Bones in the ankle-foot complex:

Bones in the ankle joint

The foot is the platform, which carries the body weight during standing, and it moves it during walking, running and jumping. The foot is a very particular part of the body. They give us stability, make walking possible and are always in contact with the place, where we are, regardless of our position.
The foot consists of 26 bones, interlinked in a complex structure. Due to the much greater functional load, the foot bones are relatively larger than the hand bones. In terms of their topography, these bones are subdivided into 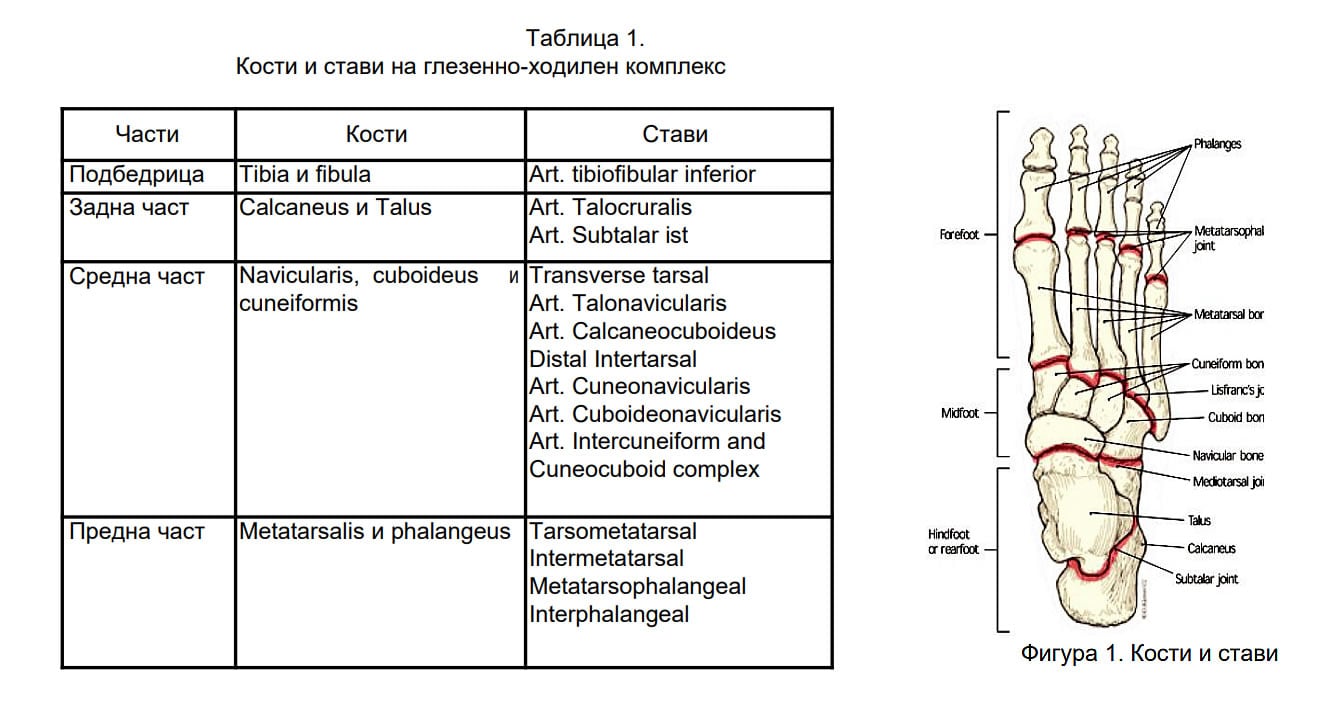 Feet in general
The foot carries the body weight to the great extent, it provides elasticity, and it absorbs the shocks during the various every-day activities, and its structure correspond completely to these roles. In order to distribute evenly this weight, the foot bones form two main arches (pointing downwards - Figure 3) - transverse and longitudinal, which are supported both by the shape of the bones that provides the good contact between them, and by the muscles and the ligaments in the foot. They act as a fixing apparatus, and the ligaments prevent stretching. These arches are essential and they provide the functions of the foot, in its role as a buffer, spring, weight distribution and protection [1, 2, 3]. 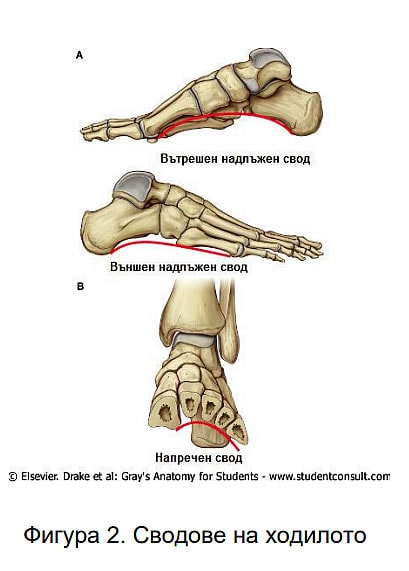 The medial longitudinal arch has a more important function, because it contributes to the position mechanics of the middle and the anterior section of the foot, and it also helps to establish the force transfer between the parts of the body. This arch provides for the "spring action" of the leg [1].

A new-born baby has no longitudinal arch, and the foot is slightly turn inward. This is totally physiological. The arched feature of the foot is shaped after birth. Only when the child learns to walk, the muscles, supporting the arch become strong enough for the arch to be visible. The bending and the turning of the shin during growth also has to do with the formation of the arch nature, during which the spiral turning of the foot appears together with the appearance of its arches [1, 2, 3].

Joints between bones in the ankle-foot complex (Table 1)

• Lower ankle joint (art. Talocalcaneonavicularis)
• art. Subtalaris - Below the real ankle joint is the second part of the ankle - art. subtalaris, which consists of the talus above and the calcaeneus below.
• art. Тalonavicularis
• Chopart's joint - The joint links between the heel and cuboid bone, and also between the head of the ankle and navicular bone are regarded and described as a single common joint, called transverse foot articulation.
• Other joints [1, 2, 3].

Muscles in the ankle-foot complex

The feet and toes are moved by muscles, located in the shins, which grab onto them with the help of tendons, as well as smaller muscles, located in the feet. The long muscles, which serve the joints in the foot and the toes, encircle, similar to an elongated cone, the tibia and the fibula. The short muscles start from the foot itself [1, 2, 3].
The shin muscles are anterior, posterior and lateral. The front group of muscles includes: m.tibialis anterior, m.extensor digitorum longus. They contract and expand the foot and the toes. The posterior group, called calf muscles, are located in a surface and a deep layer. The most important is the calf triceps muscle (m. triceps surae), which ends in the Achilles tendon on the heel bone. The lateral group consists of two small shin muscles [3].
The foot is covered with short muscles. On the back of the foot, there are the short extenders of the thumb and the other toes, and on the foot surface, there are three groups of contracting muscles – on the side of the calf, on the side of the little toe and the middle muscles. The foot muscles are quite important for the support of the foot arches, and take part in the contraction and expansion of the toes [3].

Movements in the ankle-foot complex (Table 2, 3)

1) In terms of its structure, the upper ankle joint is a pulley-type articulation. It allows for only one kind of movement in two directions:
• contraction (flexing);
• expansion (extension).
2) Аrt. subtalaris - the joint allows for lateral movements of the foot: - inversion; - eversion.
3) Transverse foot articulation or Chopart's joint:
• adduction;
• abduction. 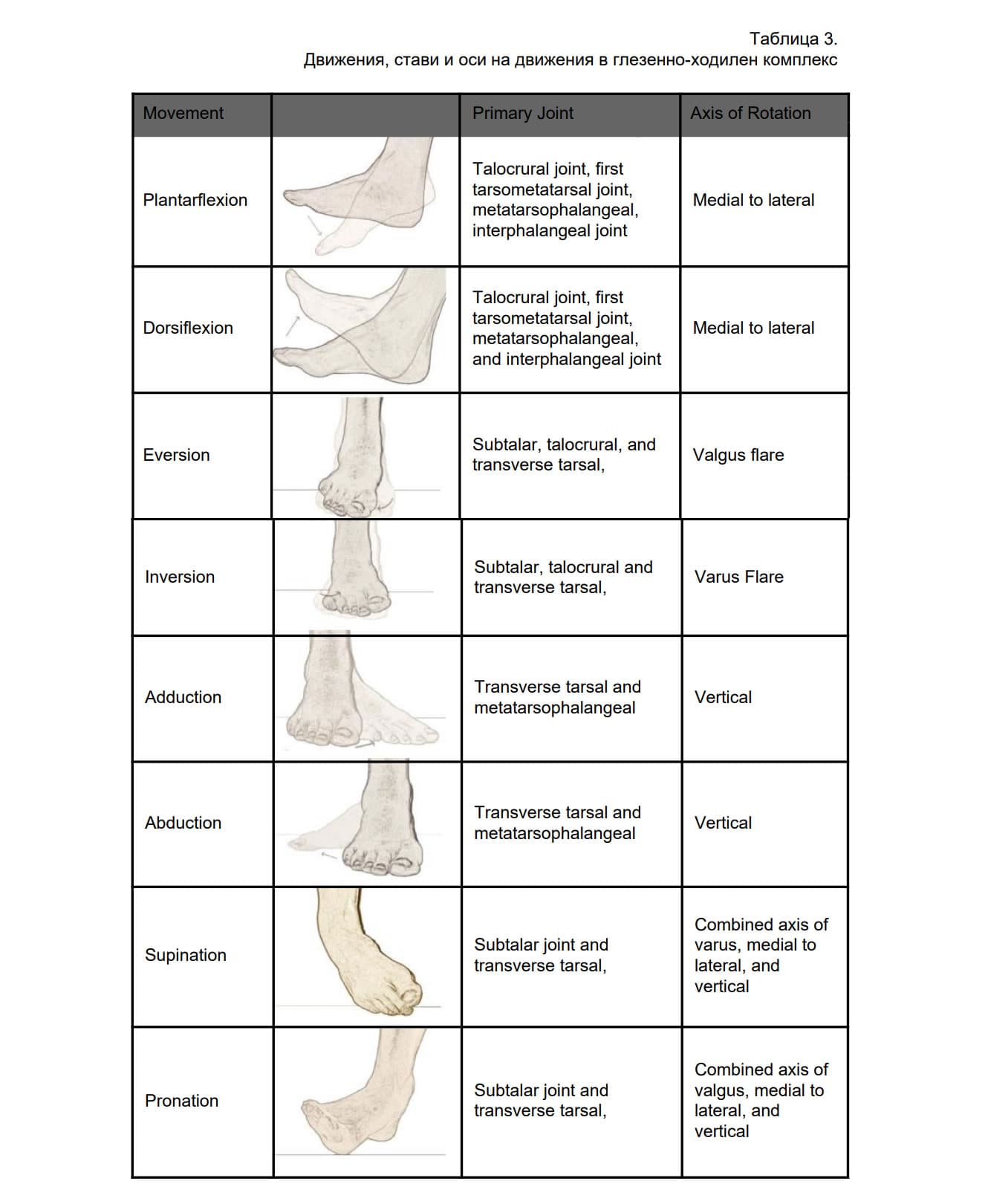 Knowledge about the structure and the function of the individual segments of the ankle-foot complex are very important, so that the arising patho-kinetic changes can successfully be diagnosed and overcome.

The ankle joint and the foot must be viewed as a whole, and not as individual anatomic structures.

The orthopedic shoes by Dr.Orthopedic are entirely fabricated in accordance with the anatomic norms for proper kinetics of the ankle-foot complex.